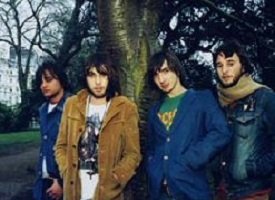 Whether or not you consider yourself a fan of Australian garage rockers Jet or even know who they are, you have definitely enjoyed one of their songs. Nowadays, it seems practically unavoidable. If you’re shuffling around on Spotify or listening to the radio, Jet is there blaring through your speakers. That’s the amazing thing about a band like Jet. They are appealing to a whole array of audiences. Every genre has its heyday and its fall, but what Jet does is give something classic a revitalization. Their blend of alternative rock with classic proto-punk similar to that of The Who is so catchy that no one can resist jamming to their tracks. Jet has found their way onto everyone’s playlist and they are there to stay.

The way that Jet started back in the early 2000s is the same iconic way that many teens’ rockstar aspirations start. Brothers Nic and Chris Cester grew up in the suburbs of Melbourne raiding their dad’s record collection and fell in love with the classic rock gems that their old man had collected throughout his life. By the time those brothers grew into their early 20’s, they decided that listening to those albums and idolizing classic rockers wasn’t enough for them. They wanted to make their own music and even be themselves idolized by a couple of suburban teens so they recruited a couple guys from the neighborhood and set out to make it big. After playing many shows with other Melbourne staples like The Specimens, Jet grabbed the attention of Elektra Records and went on to Sunset Sound Studios in Los Angeles to record their debut album Get Born. In a short matter of time, Get Born became a smash hit selling millions of records all thanks to the success of their lead single, “Are You Gonna Be My Girl?” which was featured in a widely advertised commercial for Apple’s iPod.

The music video to Jet’s “Are You Gonna Be My Girl?” is an undeniable tribute to the group’s influences. Simplistic in its form, the video shows the band in black-and-white with nothing but their instruments, amps, and of course long hair styles that would give any child of the rocking 60s a run for their money. As the band plays on in the video, each member gives off a raw and powerful energy which shows just how much this group really enjoys playing the music they love. Aside from a few live animations that paint their white background, Jet’s “Are You Gonna Be My Girl?” is the sort of video that the Rolling Stones would have wanted to put their name on back in their early beginnings.

After the widespread success of Get Born in 2003, Jet went on to put out two more albums with 2009’s Shaka Rock being the latest. In 2012, the band decided to put their journey to an end after Nic exited the group earlier on to start a musical project of his own with guitarist Cameron Muncey. However, in 2016, the members of Jet would decide to get back together and open for Bruce Springsteen and The E Street band on their Summer ‘17 tour. A year later, Jet would headline their own Australian national tour to celebrate the 15th anniversary of Get Born’s release and commemorated that tour by letting loose a live album called Get Born: Live at The Forum. Jet might have been gone for a couple of years, but it seems that they are now eager to get back to business and possibly even add a few new songs onto everyone’s playlists.

We’ve been big fans of Jet for a long time, and we can’t wait to see what budding artist becomes the next break-out star. Do you think your video has what it takes to be the next worldwide smash hit? Get in touch with Andy Gesner and the rest of the HIP Video Promo team by giving us a call at (732)-613-1779 or emailing us at info@HIPVideoPromo.com.