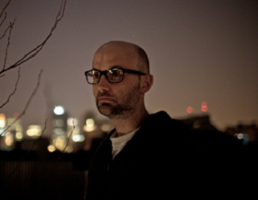 Ever since he broke through to the mainstream with “Go” in 1991, Moby has been of electronic music’s most respected names. For the next several years he racked up hits on the Billboard Dance Club Songs chart, though he’s also experimental and has never stuck to one genre; Moby has also made folk records, punk records, and protest records. His 1996 release Animal Rights took a punk-rock and ambient influence, but the 1999 release Play became a global hit as its songs were licensed to film, TV, and commercials. Last Night (2008) was an electronic dance album inspired by a night out in New York, but the follow-up Wait for Me (2009) was more emotional, personal, and melodic, recording entirely home and mixed with analogue equipment.

The first time we worked with Moby was in June 2009, sharing the videos for “Pale Horses” (his first self-released single) and “Shot In The Back Of The Head”.  “Pale Horses” features vocals from Moby’s longtime collaborator Amelia Zirin Brown, full of an empathy that’s also seen in Elanna Allen’s animated video. The protagonist – perhaps a proxy for Moby himself? – is alone in his world, and draws himself some friends, a pet, and a train. All these creations won’t last forever, but maybe that doesn’t even matter. The “Shot In The Back Of The Head” video was created by David Lynch, who was a primary influence on the Wait For Me album. This one is also animated, with a dark, ominous vibe.

That fall, we worked with Moby once again to promote the “Mistake” video. A concert favorite, “Mistake” is somewhat unusual in Moby’s discography as here, he’s actually the one singing. Yoann Lemoine’s official clip is gorgeous and cinematic, following a handsome young man as he attempts to decipher the otherworldly mystery surrounding him. The song also inspired many fan-made videos, including one that traces the emotional life of a lemon.

Moby released a deluxe edition of Wait For Me which included a new track, “One Time We Lived.” In February 2010, we promoted the “One Time We Lived” video, which was created by director Mark Pellington (who’d also made videos for the likes of Pearl Jam and U2). Here, Southern California isn’t the paradise we think of – it’s populated by the ghosts of those who’ve departed too soon. Moby once again sings the vocals on this track and he also appears on screen, singing straight at the camera while clearly feeling overcome.

We worked with Moby for the fourth time in June 2010, promoting the “Wait For Me” video. Although Jessica Dimmock shot an official clip, Moby also hosted a contest through Genero.tv for filmmaker fans to submit their visual creations. Israeli director Nimrod Shapira centers around a woman reading a book entitled How To Summon Moby for Dummies. Each of the ten steps outlines in the book makes reference to another Moby video – and whether you’re a diehard fan or new to his music, you’ll have fun following our heroine’s journey to summon Moby.

Moby has released several more albums, most recently All Visible Objects in May of this year. He has been vegan for over thirty years, and in an interview with The Guardian says that animal rights is his “day job”, regularly participating in activism such as slaughterhouse vigils and protests, as well as educating those who follow his social media. He also owns the vegan restaurant Little Pine in Los Angeles, and has written four books, including a collection of his photography and the memoirs Porcelain: A Memoir (2016) and Then It Fell Apart (2019). Head to moby.com for more info, or follow him @TheLittleIdiot on Twitter.