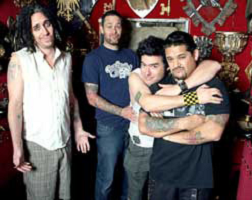 Ever since their formation in 1983, NOFX have been one of the most successful and entertaining skatepunk bands. As of 2020, they’ve sold over 8 million records worldwide, making them not just a definitive artist of the genre but one of the most successful independent bands of all time. Lead singer Fat Mike started the Fat Wreck Chords label in 1990, and it was soon a major force in the resurgence of punk rock. They’ve also been active politically: 2003’s The War On Errorism was a commentary on the Bush Administration, an created Punk Voter in 2002, a campaign to organize and politicize young musicians.

With the 2006 follow-up Wolves In Wolves’ Clothing, it was clear Fat Mike and NOFX had no intention of standing down, taking on the Republican Party, organized religion, law enforcement, and more. Just after the album’s release we promoted the video for “Seeing Double at the Triple Rock”, which on the one hand is an NOFX drinking song, but in the context of the album, it takes on a different light. The video, however, is a full-on religious send-up. It’s a performance clip where NOFX is in their element at a grungy punk club, as a punk-rock Jesus arrives and decides to crowdsurf.

NOFX continue tackling politically and socially relevant topics in their music, with their thirteenth studio album First Ditch Effort released in 2016. Since then they’ve released multiple singles, including “There’s No ‘Too Soon’ If Time Is Relative” in honor of Stephen Hawking after his passing in 2018, and “Fish in a Gun Barrel” in 2019.

Below, listen to “Fish in a Gun Barrel” with an introduction from Fat Mike, where he explains that the song was written on June 14, 2016, just days after the shooting at Pulse Nightclub in Orlando. Proceeds from the song go to Moms Demand Action, an anti-gun violence charity.