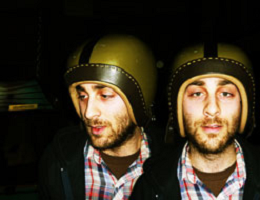 From Cap’n Jazz to Joan of Arc to American Football and several others, Mike Kinsella has long been one of emo and indie-rock’s most influential voices. His solo project, Owen, began in 2001 with the release of Owen, and it was an immediate departure from his previous musical efforts, but connected with listeners nonetheless. His sixth release, New Leaves, came out in 2009 and sees sharp, keenly-observed writing. On “Good Friends, Bad Habits” he describes his friends as “literary romantics” and compares their habits to those of Wilde and Hemingway: they do no real harm, but they have their issues all the same.

Directed by Joe Wigdahl, the video for “Good Friends, Bad Habits” makes the intimacy in Kinsella’s songwriting palpable. He sits in a photo booth, remaining reserved at the back, while young couples step in to get their picture taken, kissing and smiling and making faces at the camera. We can tell Kinsella’s friends have bad habits, and maybe he does too.

Owen has since released four more albums: Ghost Town in 2011, L’Ami du Peuple in 2013, Other People’s Songs in 2014, and most recently The King of Whys in 2016. We had the pleasure of working with Kinsella and the team at Polyvinyl Records once again in 2017 to promote the video for “Settled Down.”

After a fourteen year hiatus, American Football returned in 2014 with a deluxe edition of their debut album; that summer, we had the pleasure of promoting their video for “Never Meant.” Their second album was released in 2016. Kinsella is a busy man: in addition to Owen and American Football, he continues to play with Joan of Arc. We wouldn’t be surprised if one of his projects releases more new music soon!

We’ve been fans of Mike Kinsella for many years, and we’re eager to see what else he has in store for the future! We can’t wait to see who becomes the next break-out artist. Do you think your video has what it takes to be the next break-out smash hit? Get in touch with Andy Gesner and the rest of the HIP Video Promo team by giving us a call at (732)-613-1779 or emailing us at info@HIPVideoPromo.com.