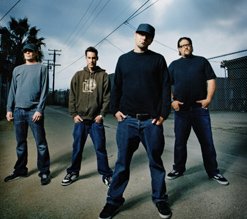 Here at HIP Video Promo, we’ve been working hard to promote music videos since the year 2000. It’s important for us to help younger and independent artists get the recognition they deserve. It’s exciting to be on the ground floor with artists that become household names (and with over 3400 videos under our belts in 20 years, there are quite a few). Every Friday, we’ll share a “Flashback Friday” video, where we get to reflect on one of our favorite videos from many years ago.

Who would’ve thought that one of the sunniest places in the world would be the birthplace of a genre so committed to being radical and crude? That’s right. I’m talking about California and skate punk. A combination that the average, non-alternative person wouldn’t think to put together but works out well in the scope of things. Paved in the philosophy of kicking back and letting loose, skate punk has been instrumental in bringing rock back into the mainstream and starting trends that defined the 90’s as a whole. Many bands have had the honor of waving the flag of skater culture, but if we were to choose one that encompasses what the genre is all about, we’d have to choose none other than Hermosa Beach’s own Pennywise.

There is nothing you’ll find that’s inorganic about the story of Pennywise’s inception. Like many bands that came before them, they weren’t some experiment engineered by a major label to make money. Instead, they were just a bunch of high school kids who all listened to Black Flag and said to themselves, “we can do that.” Becoming one of the first groups to be signed by Epitaph Records in the ’90s, they went on to release a debut album that was widely regarded as being the start of a new frontier in punk rock. Instead of embracing the nihilism and general dismay of most hardcore music, Pennywise became known as the uplifting band who tried to relay progressive messages to the Gen X youth. After that, the band became highly regarded as the group that maintained the Southern California scene and turned it into a nationwide phenomenon. Proving themselves to be punk rock to the core, Pennywise isn’t just a great band. They’re a band that also cares about the impact of the music they make.

With “The Western World,” Pennywise seems to be at it again with their tendency to spout social commentary toward the capitalist society we live in. Set in what appears to be a post-industrial Orwellian reality, fans are shown firsthand a group of identical young ladies engineered by mad scientists and sold to the businessman with the most money in his pocket. In the system they live under, these women are nothing but commodities and are treated as if they have no mind of their own or any right to life. It’s a standard case of market manipulation if you’ve ever seen one, but things change as one of the engineered models snaps out of her trance and goes out of her way to free the band who is being held captive. Soon, Pennywise puts on a show that seems to break everyone else out of their dismal routine and sets forth an agenda of freedom and individuality. It’s a revolution unlike any other, and Pennywise proves to be at the helm of the entire operation.

After over 30 years of being a band, it’s safe to say that Pennywise is still going strong. Although this pandemic has stopped touring in its tracks, Pennywise is putting in the work on an all-new, hard-rocking album. Will this one be another scathing remark on society as a whole? Will it be another testament to why everyone loves California punk? No one knows quite yet, but what is certainly known is that we can’t wait for it. Hurry up on the production, Pennywise: your fans are getting restless!