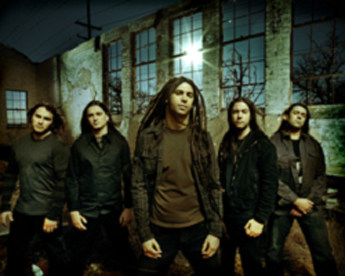 Is there a genre with as many variations and subgenres as metal? Some metal acts make a name for themselves by honing in on the specifics of one subgenre, but not Shadows Fall. Formed in Springfield, Massachusetts in 1995, if it’s metal – they’ve been there, done that: death metal, thrash metal, Goteborg melodic metal, and pure American hard rock – and they’ve fused these styles into an amalgam that’s wholly their own. So is it any surprise that, by the time we worked with them in the spring of 2007, they had been praised by everyone from Alternative Press to Revolver to MetalHammer, with Guitar World rating Shadows Fall guitarists Jonathan Donais and Matt Bachand as two of the 100 Greatest Guitarists of All Time.

After releasing Somber Eyes to the Sky on Bachand’s own label Lifeless Records (1997) and Of One Blood (2000), The Art of Balance (2002), and The War Within (2004) on Century Media, Shadows Fall signed to Atlantic Records. Their Atlantic debut, Threads Of Life, was released in April 2007. Producer Nick Raskulinecz helped the band chase their hybrid of thrash-metal fury and melodic intensity and lead single “Redemption” was a quick hit, reaching #1 on Mediaguide’s survey of Metal Specialty Tracks, and Shadows Fall became one of the few heavy bands to be featured on MTV2’s The Drop.

Just a few weeks after Threads was released, in April 2007, we were delighted to team up with Shadows Fall to promote their “Redemption” video. Director Zach Merck – who’d shot the bands previous clips for “Enlightened By The Cold” and “Inspiration On Demand” in 2005, as well as clips for Hinder, Converge, Dropkick Murphys, and more – sets the band on top of a city building, rocking out and broadcasting their riffs to the streets below. Set up high, Shadows Fall bring their insane live energy – the same energy that made them a quick favorite at Ozzfest in 2003 – to the streets below. It’s part metal show, part live-action horror comic, and all-around adrenaline.

A few years later, in 2012, Shadows Fall released their seventh, and ultimately final, album, Fire from the Sky, through Razor & Tie. However, in 2014, after announcing several final tours in Europe and North America, Shadows Fall went on hiatus. They played a few reunion shows in 2015, but the members have since focused on other bands: guitarist Jonathan Donais had joined Anthrax in 2013, drummer Jason Bittner joined Flotsam and Jetsam, guitarist Matt Bachand joined Act of Defiance. Though we’re sad Shadows Fall is no longer around, we’re proud to have been a part of their journey!