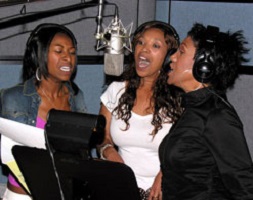 With a career spanning over four decades, The Pointer Sisters are one of the most beloved R&B/soul groups. Sisters June and Bonnie Pointer began performing together in 1969; their sister Anita joined them soon after, and they signed to Atlantic Records, where they’d release several singles. In 1972, after their fourth sister Ruth joined, they signed to Blue Thumb Records where they released their debut album. But they weren’t limited to one genre: in fact, in 1975 they won a Grammy Award for Best Country Vocal Performance for “Fairytale.” They erased the lines between jazz and soul, country and electro-pop, funk rock and Broadway show tunes, also incorporating elements of disco. They were also the first female African-American singing group to perform at the Grand Old Opry in Nashville, further cementing their status as legends.

There’s nothing quite as magical as Christmastime in New York City – and there’s no shortage of songs and music videos celebrating Yuletide in the Big Apple. In late 2006, we promoted The Pointer Sisters’ “Christmas in New York” video. “Christmas in New York” came from the Smooth and Soulful: The Christmas Collection compilation on YMC Records, where they were joined by several incredibly talented, beloved artists, including Donna Summer, Natalie Cole, and Al Jarre.

After the passing of founding member June Pointer in early 2006, the group carried on and became a multigenerational act: Ruth Pointer’s daughter Issa joined the group. Issa, Ruth, and Anita are joined by their dancing fans inside a child’s snow globe. It’s a magical winter wonderland as snow falls around their faces, images of New York projected behind them. With the rich harmonies, big beat, and undeniable enthusiasm that The Pointer Sisters are known and loved for, there’s something truly wonderful in the air!

From 2009 to 2015, Anita, Ruth, and Issa were joined by Ruth’s granddaughter Sadako Pointer – although they often performed as a trio, rotating who would perform. They toured internationally and continued to perform at corporate and private events, although their most recent studio album was The Pointer Sisters Favorites in 2008. No matter what happens, The Pointer Sisters will always be remembered for their indelible mark on music and our lives!