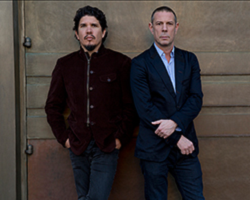 The club scene gets a reputation that doesn’t exactly encompass the entirety of its influence. When people think of club music, they usually picture fast-paced dancing, bumping basslines, and speakers about to break open from the volume they’re playing at. It’s slim to none that you’d find anybody who’d understand that what you hear in the club can be chill and all about the groove. Clubs can have a lounge atmosphere and create a spaced-out feeling where you can vibe with the people around you. In fact, there is a band out there that lives up to this chill club ambiance, and their name is Thievery Corporation.

This duo got together in the heart of Washington D.C.’s club scene. Bonding over their mutual appreciation for club life and bossa nova music, Rob Garza and Eric Hilton wanted to create a sound that captured the club experience that they were embroiled in. Starting their own record label based out of the Eighteenth Street Lounge, they first made a splash in the club waters with the release of two twelve-inch singles from their debut album, Sounds From The Thievery Hi-fi. In a few short years, Thievery Corporation would receive critical acclaim for their brand of chilled-out downtempo music and go on to work with musical minds such as Wayne Coyne from The Flaming Lips. The duo has performed at festivals such as Chicago’s own Lollapalooza and created music for benefits such as AIDS awareness. Thievery Corporation is arguably one of the busiest acts to come out of the club scene and undoubtedly creates music that is designed to impress and amaze.

The “Depth of My Soul” music video presents itself as an ominous grasp on the past. Viewers are presented a snow-kissed forest range and a woman riding through it on a noble steed. As she is passing through the frozen woodlands, she comes across people that are frozen in place by the harsh weather. Approaching them, she realizes that they are people from her past and recollects joyous or painful moments she has had with each of these individuals in her prior life. Our winter desperado then finds a cabin in the rough of the woods, and in it is a dark and ominous shaman preparing to perform a ritual. Our adventurer seems to know this mysterious figure and takes no precaution in placing herself in the strange mystic’s embrace. All throughout the video, our subject seems to be looking for something that she has lost, and in this odd person’s arms, it seems like she has finally found it.

Thievery Corporation has been busier than ever since the release of “Depth of My Soul.” Since then, they have released two albums to resounding notoriety and success along with a music video that has reached over 1 million views on YouTube. Rob and Eric are consistent in making music that reaches out to fans and most definitely will have music on the way that will provide the same provoking effect. HIP Video Promo wishes the best for Thievery Corporation in the new year and hopes they’ll keep giving the club scene the treatment that it deserves.