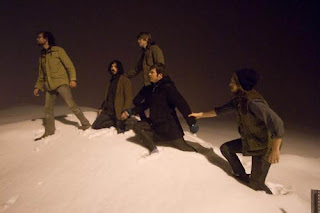 The Fleet Foxes, for their next adventure, wanted a place with an echo. And they wanted to be unseen.

So they found an abandoned wing of the Grand Palais in France, according to the LA blog, and proceeded from there.

The wing was a university that fell into disuse. It featured soaring high ceilings, and torn carpets, and pigeons flying all over the place (you know, because it’s abandoned.)

They had themselves filmed as they performed “Blue Ridge Mountain” in the empty space. The high ceilings, according to the LA blog, multiplied their voices and instruments times three.

Considering the tendency of Fleet Foxes to break out into ancient baroque harmonies, the Grand Palais seems like a place that suits them well for a performance.

But the place apparently starting creeping them out after a while, and they retreated from the building into the sunlight, sat on the grass in a field and performed “Sun Giant.”