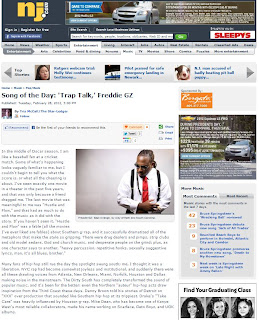 In the middle of Oscar season, I am like a baseball fan at a cricket match. Some of what’s happening looks vaguely familiar to me, but I couldn’t begin to tell you what the score is, or what all the cheering is about. I’ve seen exactly one movie in a theater in the past five years, and that was only because a friend dragged me. The last movie that was meaningful to me was “Hustle and Flow,” and that had as much to do with the music as it did with the story. If you haven’t seen it, “Hustle and Flow” was a fable (all the movies I’ve ever liked are fables) about Southern g-rap, and it successfully dramatized all of the metaphors that make the style so gripping. There were drug dealers and pimps, strip clubs and old model sedans, God and church music, and desperate people on the grind; plus, as one character says to another, “heavy percussion, repetitive hooks, sexually suggestive lyrics, man, it’s all blues, brother.”

Many fans of hip-hop still rue the day the spotlight swung south; me, I thought it was a liberation. NYC rap had become somewhat joyless and institutional, and suddenly there were all these drawling voices from Atlanta, New Orleans, Miami, Norfolk, Houston and Dallas making noise in the mainstream. The Dirty South has completely transformed the sound of popular music, and it’s been for the better: even the Northern “auteur” hip-hop acts draw inspiration from the Third Coast these days. Danny Brown told his stories of Detroit on “XXX” over production that sounded like Southern hip-hop at its trippiest. Drake’s “Take Care” was heavily influenced by Houston g-rap. Mike Dean, who has become one of Kanye West’s most reliable collaborators, made his name working on Scarface, Geto Boyz, and UGK albums.

Check out the entire feature here!