Frightened Rabbit kicks it with Deathcab

Mötley Crüe revs it up 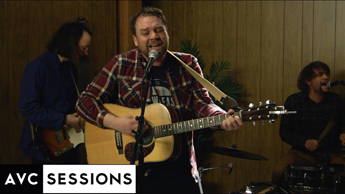 Scottish indie rockers Frightened Rabbit, shown above, and Deathcab for Cutie are pairing up for a romp around the world. Check out tour dates here. I think this is a great match-up for a tour–both bands straddle the edge of indie. They both revel in their own unique sound while creating accessible sonics for the larger crowds. They have something for everyone.

But although most people have heard of Deathcab For Cutie, fewer people know about Frightened Rabbit.
Despite the fact that they’re named after a fearful rodent, Frightened Rabbit is a laid-back rock trio, teasing out gentle melodies with guitars and horns and a dash of sunlight. But, like Belle and Sebastian, they temper these gentle tunes with ironically miserable lyrics. Frontman Scott Hutchinson said this in an interview with Pop Cop in reference to the band’s new album Midnight Organ Fight:

“There’s a song about throwing yourself off the Forth Road Bridge. I’ve thought about it before. I’m not bullshitting. When I’m miserable, I’m genuinely miserable. I don’t think you can write without having a real intensity.”

Check out the video for Frightened Rabbit’s single, “Head Rolls Off,” located below.