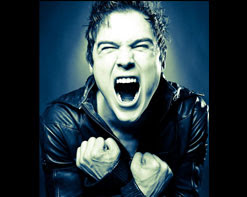 Since his last video “War With the Wolves,” Eric Dill’s music has morphed into a natural phenomenon. This Platinum recording artist is known as the lead singer and guitarist of the popular pop/rock group The Click Five, but with a recent and successful launch of his solo career he is taking on the music scene by storm. “War With The Wolves” made lots of waves across the country, even landing itself on the mtvU Freshmen! With that scorching momentum, we are pleased to present viewers and programmers with his latest video clip “In My Head.”

This critically acclaimed singer, songwriter, and musician is an Indianapolis native, known specifically for selling out shows from across the world during the 2005 Backstreet Boys Tour and Ashlee Simpson’s North American Tour. After parting ways with the members of The Click Five in November of 2006, he began focusing on his own ambitions and began working on his solo career.
Dill has worked with well-known artists such as fellow musicians from the band Nickelback, Chris Daughtry, and contestants form the television series American Idol. Eric has even made television appearances on Live with Regis and Kelly, Late Night with Conan O’Brien, and Jimmy Kimmel Live; he even played the male lead role in Sony Pictures movie Taking Five. His first produced single “No Surprise” received a Platinum Album Award in 2009, along with two BMI Pop Awards during 2010. Dill’s debut album Forever Is Not Enough was released last year on Vigil Records, and from the album, we present you “In My Head.” Click here for the full bio on HIPVideoPromo.com!