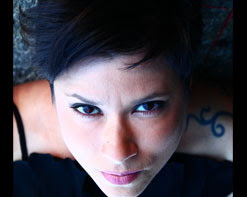 SLV is the solo project of Pistolera frontwoman/songwriter/founder Sandra Lilia Velásquez. After recording three studio albums to critical acclaim and touring extensively with Pistolera, her solo debut EP, Dig Deeper, will be released on February 12, 2013. Ten-time Grammy nominee and legendary bassist Meshell Ndegeocello produced the four-song recording and is also featured on the EP, playing bass on three of the four tracks. Ndegeocello shares songwriting credit on the first track, “Enough”, which SLV made into her debut music video. SLV’s power to create inspiring tunes is included in this revolutionary video clip, representing all that this powerful artist emanates.

NPR called her last Pistolera album “modern…daring…inventive”, yet it is with her new solo project that we realize there are no limits to this artists boundaries. “Enough” is a song that explores the pressures of living in a complex society. Viewers are presented with the image of a fatigued priest who is trying to answer the internal question of what else he can do, while SLV sings the songs in a confessional booth. She speaks to the collective anxiety we face as a nation that no matter how much good we try to do it will never be enough to create the society think it should be. SLV soars throughout this song “Enough” and the clip takes us to a place of utter amazement. Click here for the full bio on HIPVideoPromo.com.