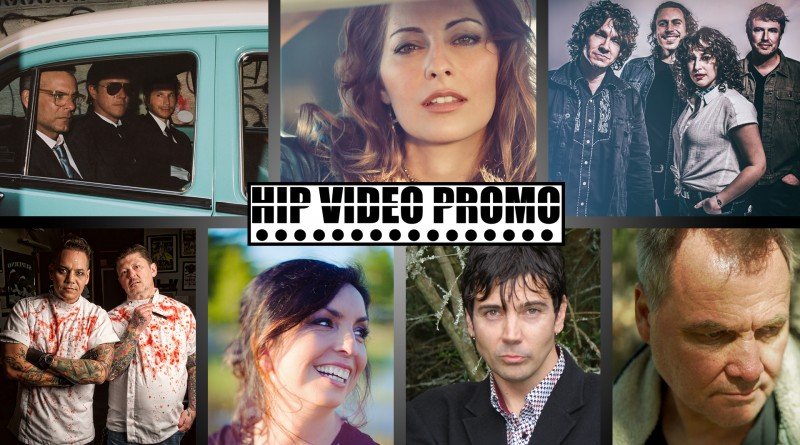 No matter what genre or what country the artist is from, the true mark of a great song is one that connects with people. This week, we’ve got nine videos from seven artists to share, and no matter what you enjoy, we have a feeling at least one will connect with you. Read on to see our latest HIP Picks to see what we’ve got in store!

This summer, we worked with Interpol to share their video for “The Rover”. Now, they’re back with the clip for “If You Really Love Nothing”, another cut from their sixth studio album, Marauder. Starring Kristen Stewart and Finn Wittrock, “If You Really Love Nothing” shows Interpol dipping their feet into temptation. Stewart projects her feeling of emptiness onto others by using them for her own pleasure, before making her getaway to avoid facing her consequences.

We may think of country music as an American specialty, but recent years have seen European country stars coming to the forefront. One of these is Nadia Lanfranconi, an Italian actress-turned-country musician. For her “Italian Country Song” clip, she’s partnered with director Andrea “Vonjako” Gicomini, who presents her as a pure country girl, riding horses, climbing trees, wearing boots and a broad-brimmed hat, and sitting in the steps of a rural church.

When Nashville-based quartet GOODING plays rock, they do so with absolute abandon and total commitment to the moment. They write and tour constantly, and when they’re not making music, they’re on the road speaking at high schools for Funding The Future, the charity they’ve set up encouraging fiscal responsibility in young people. “Because It Hurts” is the lead single from Building The Sun, and the video has plenty of footage of the band in action. Visual effects threaten to confine the frontman, but no matter what, he makes sure to get his message through.

They’ve been called “the Sweeney Todds of rock” – and with razor-sharp riffs and dangerously catchy songs, The Cutthroat Brothers make good on that tag. Frontman Jason Cutthroat and drummer Donny Paycheck are based in Tacoma, and their clip for “Kill 4 U” takes place in Donny’s own Supernova Barbershop. And sure, things get bloody – but The Cutthroat Brothers leave their customers with a great haircut.

No two people share a bond or a lifetime of experiences the way siblings do. Hugh James has been playing piano since he was five years old, and has built a career with writing credits and a regular gig at The Great Hall at Disney’s California Grand Hotel in Anaheim. Once a successful contractor, his brother Doug fell on hard times and, after a long battle with alcohol, passed away in 2014. This story inspired him to write “My Brother’s Shoes”, a song and video that are about “love… in the purest form.” Though Doug was the inspiration for the song, ultimately, “the song was about my brother, but it’s not about MY brother – it’s about your brother, it’s about all of our brothers, it’s about all of us.”

Though she’s long been associated with Traverse City, MI, Angela Josephine has a deep connection to Ireland, and motifs and melodies from the Celtic Isles are woven through her entire body of work. She’s now shared Daylight (Stone Bright Solid, Volume 2), and has partnered with Belfast-based director Helen Rollins for the clips for “Go Easy” and “40 Days”, both filmed in Northern Ireland. “Go Easy” see Josephine duet with the sweet-voiced Chris Bathgate, and “40 Days” is an instrumental summer storm, highlighted by Josephine’s hammered dulcimer.

Dar.Ra is a rock and roll diamond in the rough molded in the shadows. His craft has been ever-evolving since the 90s, and how shares his latest Dirty Lil Secrets EP. From London to the US, he’s once again partnered with producer Harvey Summers. Dar.Ra is now sharing two brand new videos, “Night-Stepper” and “Heart Shape Pill”,and both were directed by Brendan McGowan. He begins his reign in “Night-Stepper”, a coat of armor concealing his pain, while “Heart Shape Pill” centers around a man struggling to accept his sexual identity after years of torment from his predecessors.