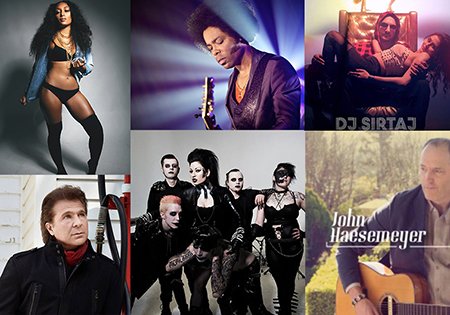 From what we’ve heard, April showers bring May flowers… but what we’re hoping for over the next month is TONS of new music videos. We’ve been busy here at HIP HQ- things are as hectic as ever, as we help new and established artists get the airplay, placement, and promotional coverage that they deserve for their music videos. From indie rock to hiphop to everything in between, we do it all!

Gabriel and the Apocalypse are back with a brand new album The Ghost Parade, and the heavy metal meets hard rock meets industrial sound is perfectly exemplified with “Thrill of the Kill”. The music video for “Thrill of the Kill” is brutal and disturbing, but impossible to turn away from. In between shots of the band performing, a twisted group of “doctors” perform experiments that seem to reference Mengele and cosmetic animal testing, only inflicting pain and suffering on their subjects. Yet as intense as it is, the “Thrill of the Kill” music video is so masterfully executed that the end result is more theatrical than pure shock value.

“Blue-eyed soul” singer Frank Shiner has just released the “Rainy Night In Georgia” music video, and the black and white clip is a soothing break from the chaos of everyday life. The “Rainy Night In Georgia” music video follows Frank as he goes about interviews, performances, and late nights away from his wife, Suzanne, who sends him a message just to say he’s on her mind. “Rainy Night in Georgia” will be included on Frank’s new album Lonely Night, Lonely Street (out May 19 via Bakerson/BDG/RED).

Tajinder Singh was born in India, but he came to the United States in 1991, and has since called Atlanta, Ga. his home. Now performing as DJ SirTaj, his music is a fusion of Punjabi, soul, and hip-hop flavors. The “All Day” music video shows DJ SirTaj- along with Q.T., Slice 9, and DJ Funky, who join him on the track- hustling, with beautiful women, lots of cash, and expensive cigars.

To say that Bianca Ingram is a triple-threat would be a bit of an understatement- not only can she sing, dance, and act, she’s a songwriter, designer, and director as well. Her latest visual for “What I Want” brings her self-proclaimed “space jungle” sound to life. From a castle throne to an electric party filled with good-looking men, the “What I Want” music video gives viewers a peek into Bianca’s mind, and what she wants.

John Haesemeyer takes reference from the great songwriters like Neil Young, Bruce Springsteen, and Bob Dylan, for an acoustic-driven sound that combines elements of folk, pop, and classic rock. This week, he premiered the music video for “Maybe If I Try”, and we’re already big fans. The “Maybe If I Try” music video follows an acrobat as she trains; she falls, she gets up again, and continues training, in hopes of one day getting what she wants.

Coming up, we’ve got two exciting videos coming for you. Alex Cuba will be premiering the “Lágrimas del Que Llora” feat. Josemi Carmona music video this Friday, April 7. The track comes off his upcoming album, “Lo Único Constante”, which will be released the following day, April 8. Recording at the famous Musigrama Studio in Madrid, Spain, it’s an artistic, flamenco-infused track paired with live footage from the studio.

Next Wednesday, April 12, Electric 5 will be premiering their debut music video: it’s their take on Gnarls Barkley’s 2006 hit “Crazy”. The Chicago-based electric string quintet puts their own twist on the song. The music video for Electric 5’s version of “Crazy” (which was directed by Adam Moorman), tells the story of a woman scorned for getting revenge on her partner. It’s an impressive clip, and we’re sure you’ll love it.