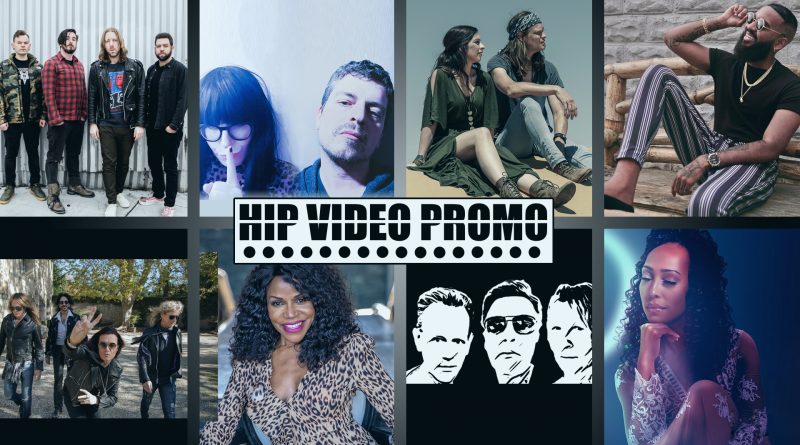 From rock to hip-hop to everything in between, a good music video helps you get the vibe for an artist’s sound. Our newest HIP Picks – Weekly Client Roundup is here- take a look at the videos above, and learn more about the clips by clicking on the links below.

Together as Ready, Steady, Die!, US-based Morgan Visconti and UK singer-songwriter Sam K. bend dream pop, electronic rock, and darkwave to their will on their debut Pleasure Ride. “Deep” is the slowest of burns. The “Deep” video (directed by Visconti, who goes by WeekendClass) fuses 3D photo scans and infinite zooms of trees and bark, employing all-too-realistic CGI for a non-stop hypnotic, glitchy trip.

Sharon Hendrix’s résumé is a whirlwind tour through the whole history of post-Beatles pop: Bob Dylan, Elton John, Stevie Wonder, Olivia Newton-John, and so many more. Since 1978, she’s been enlivening Barry Manilow’s songs, and has also toured the world with him and duetted with him on his 1985 rendition of the soul standard “Ain’t Nothing Like The Real Thing.” Sharon Hendrix’s new single “Believe and Become” sounds remarkably contemporary, and its clip (directed by Dan Voss Jr) is a pure showcase, with Hendrix in complete command of the screen as she delivers her empowering message.

“Walking On A Wire” Music Video: The Imaginaries (Rap)

To the casual observer and their ever-more numerous fans, The Imaginaries – Maggie McClure and Shane Henry – are the picture of success: between the two of them, they’ve opened for acts like Etta James, B.B. King, Buddy Guy, Sara Bareilles, and many more. “Walking On A Wire” comes in response to the constant push-pull in any artist’s life; director Reagan Elkins (who shot the pair’s clips for “Revival” and “Thinking ‘Bout You” captures Maggie and Shane over the course of two very long days in Oklahoma’s Little Shara and Gloss Mountain State Parks.

The members of The Dead Daisies are some of the kings of late ’70s / early ’80s hard rock: Doug Aldrich of Whitesnake and Dio, drummer Deen Castronovo of Journey and Bad English, bassist and singer Glenn Hughes of Deep Purple, and rhythm guitarist David Lowy of Red Phoenix. The Dead Daisies have toured with Kiss, brought stadiums to their feet, and released five records, but this time they’re going acoustic, re-imagining the Humble Pie classic “30 Days In The Hole.” The band shot the “30 Days In The Hole” clip separately, all on their phones – the isolation is heavy, with a single raven silently haunting the clip

As a praise and worship leader, choreographer, minister, motivator, and true believer, Quianna Crute has always put her devotion first. “Anthem” is the latest single from her debut album Created To Worship, and it brings verses from scripture to life. The track features a verse from Florida rapper and singer Canton Jones, and both Canton and Quianna appear in the “Anthem” clip. Director Nicholas Ranger shows members of Quianna’s outdoor congregation, masked against the coronavirus and holding up signs testifying to God’s presence in their lives.

Staying incognito allows the music to take the main focus, and neo-80s band Head Fake takes the definition of “staying on the down-low” to a whole new level. “Sucker For Your Ways” encapsulates the feeling of being drawn to someone and completely enamored by their very being, and the band let the music and visuals talk in its brand new video. At times, the two protagonists are intertwined and at others separated; they’re in sync, but not on the same page.

Brooklyn native Elijah makes moody R&B with dark undertones similar to The Weekend, but fusing specific ardent energy a la Michael Jackson. Now, Elijah’s skills include writing, recording, and producing. “Raw” is pure dark R&B ear candy, and its video was shot at Madame X in Soho, known as “the sexiest bar in New York City”. Directed by Llama, this three minute clip is a modern film noir motivated by illicit romance with an edge.