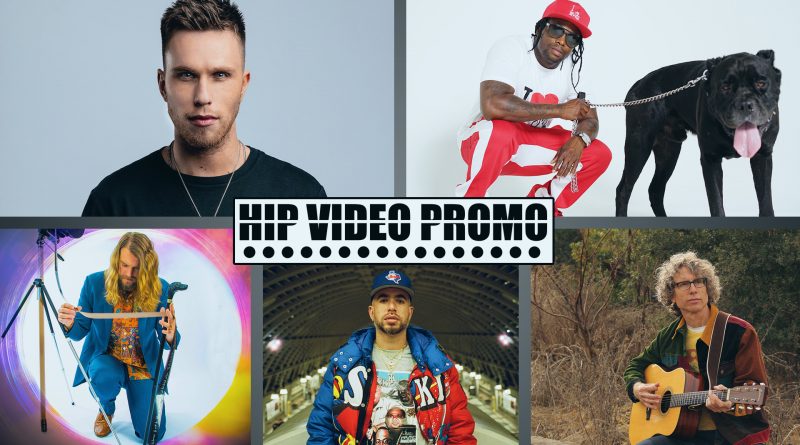 From rock to hip-hop to dance, musicians of all genres are using this time to their advantage and making music videos that will turn first-time viewers to long-time fans! Our newest HIP Picks – Weekly Client Roundup is here- take a look at the videos above, and learn more about the clips by clicking on the links below.

Since his breakthrough, Nicky Romero has toured and recorded relentlessly, sharing festival stages and composition credits with the best-known names in electronic music: Avicii, Tïesto, David Guetta, Calvin Harris, Steve Aoki, Armin van Buuren, Dmitri Vegas and Like Mike, and so many others. On “Destiny”, he’s joined by Turkish-German DJ and producer Deniz Koyu as well as the internationally-heralded Swedish singer-songwriter Alexander Tidebrink. Director Paul Gerwien is a storyteller at heart and here, he’s shown us a pure love story.

Miami’s Kase 1hunnid started by freestyling on the corner, and after signing to Slip N Slide Records (the label that launched Trina and Trick Daddy), he made the jump to Platinum Spoon Muzik, the label he owns and operates. On “I Luv My Dawgs”, he’s joined by Overtown’s YD and the one-and-only Snoop Dogg. Directors Shula The Don, Space 305, and Rob Dade and Love Shack show Kase, Snoop, and YD taking over the local footbal team’s home field, walking the streets of Liberty City, minging with folks, and kicking it in the afternoon sun.

Following the stand-alone single “Shooting Arrows At The Sun”, “Touch The Burning Sky” is David Drake’s first single off his upcoming Imaginary Movies, and it’s hard not to get pulled into the world he brings to life in just four short minutes. Written and produced with award-winning composer, producer, sound designer and engineer Mike Wolpe, “Touch The Burning Sky” is a serene, longing gaze deep into the unknowable power of nature – and shows off Drake’s immersion in the world of classic rock. Director Adam Petrishin – who’s also the man behind “Shooting Arrows At The Sun” – shows us a man who treads inky waters and hopes to make it to shore, at one with the beauty of California’s coastal forests.

KOTH – aka Thaddeus David or “King Of The Hill” –  has been owning Seattle’s underground rap scene for years on his own and as a popular member of Helluvastate and State of the Artist. Many of his singles have received praise from prominent publications like The Hype Magazine and Elevator, who has also championed him as “one of Seattle’s talented lyricists.” Throughout his stardom, he has supported Slick Rick, Mobb Deep, Mos Def, etc. and sold out The Crocodile in the Emerald City with TylerxCordy. No matter what he’s doing, KOTH is continuously adding to his empire and bringing us along through his journey. “My Time” is the debut single off his upcoming First Team, and it’s an anthemic banger whose video (directed by Deadeyez)shows KOTH & Co painting Capitol Hill red on the historic Pike block, following them through the city to various Seattle landmarks.

Released this May, Death Valley is singer-songwriter David Haerle’s second album following his 2018 debut Garden of Edendale. Haerle directed “The Free Show” video himself, and the song takes its name from his longtime partner Erica, who will point out a Van Gogh sunset or an exquisite cloud formation and declare it “a free show!”. In the video for “The Free Show”, Haerle shows viewers some of the many “free shows” Los Angeles has to offer, from a Chevy in chartreuse to colorful murals on the sides of buildings.

A veteran of the music business, David Haerle heads up the L.A. based record company CMH Label Group where he continues to champion the independent spirit in music. Now he’s plugged in his Fender for a different kind of musical journey with the Death Valley album. The song and video (directed by Michael Pottle) “Run And Be Free” draw from Haerle’s childhood in Los Angeles and his second home in McMinnville, TN, where his grandparents had a farm, a juxtaposition of the peace and quiet of country life in Tennessee and the buzz of the big city.