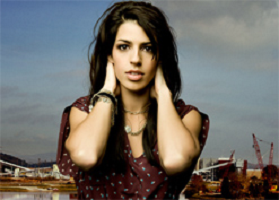 The next generation is gifted the responsibility of improving the direction society is headed in. Whether it be social rights, climate crises, or economic depressions, it takes trusted and educated young people to make a difference and take a stand. Brooke Fraser is a musical force of nature, an artist that uses her platform to raise awareness and her voice to reach thousands. She became one of the bestselling New Zealand singer-songwriters in history due to her intelligent and perceptive indie-folk.

As playful and joyous as she is, Fraser has seen the horrors of the world firsthand. While on a charity-sponsored trip to Rwanda, she met a young girl, orphaned by war. Fraser named her second album, Albertine, after her, and the title track tells her story. Albertine is a work of tremendous power and staggering intensity, written after the singer came face to face with the consequences of genocide.

In 2008, we promoted the first track off of Albertine, “Shadowfeet.” The song is a reference to C.S. Lewis’ theme of living in “Shadow Lands”, until we reach our true homeland with HIM. The music video is a simple but brilliant concept; Fraser stands on the street corner and looks directly into the camera while singing, but every new verse gives us a new friendly face to sing the song to us. She opens and closes the clip by taking a picture on her camera, holding onto this moment forever.

Two years later, in 2010, we worked with her again for “Something in the Water.” She sits with a copy of The Odyssey open in her lap, hands folded, rocking in her seat. The artwork on the wall and her dress choice changes, but nothing ever fit modern criteria. The video is also partially animated, and it captures a vagabond exploring new parts of the world, determined and tenacious.

After many years, Fraser has matured and evolved her style; no longer are the days of the innocent and soft-spoken artist, she is now a bad-ass that strides through the city in crystal-studded leather jackets. “Kings & Queens” highlights expressive dances performed in forgotten alleys and abandoned warehouses. The dancers use everyday objects as their form of expression such as bedsheets, mirrors, and volleyballs. If we gave value to the items that surround us, we would beauty in life a lot more easily.