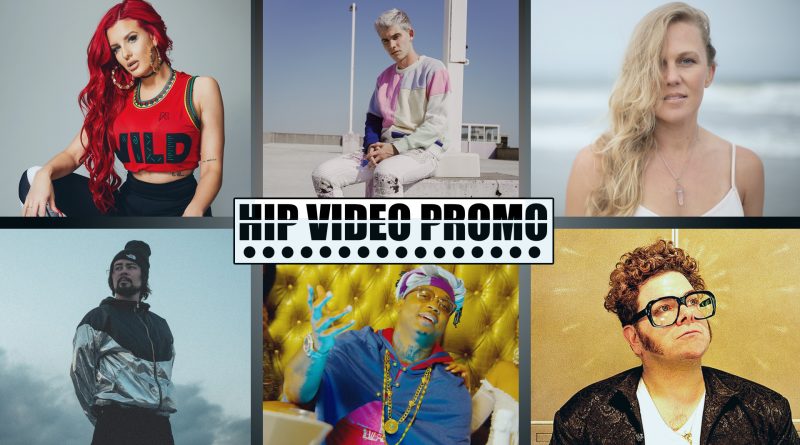 One thing’s for sure: things never slow down here at HIP HQ and we’re thrilled to share half a dozen brand new videos this week! Our newest HIP Picks – Weekly Client Roundup is here- take a look at the videos above, and learn more about the clips by clicking on the links below.

Justina Valentine has dazzled on TV screens on MTV’s Wild ‘N Out, as well as her appearances on TRL, How Far is Tattoo Far, Revenge Prank & hosting reunions for The Challenge, Jersey Shore, and Ex on the Beach. Following the success of past singles “Strawberry Soda” “Damn”, “Voicemail” & “Candy Land” (which featured Fetty Wap) that have led to praise from outlets like Substream and Indie Hip-Hop, she’s back with the interstellar hit “Lucky You.” Video Chemistry directed the “Lucky You” video, which sees Justina deliver a routine that’s both sexy and approachable.

Young Tuxx (frontman of the Brooklyn band Best Behavior) and co-writer/musical-conspirator Ryan Sieloff have created a universe called Papi Shiitake and they want you along for the ride. Their newest video “Enjoy The View”, directed by Bill Dvorak & Young Tuxx, encompasses all of the quarantine tedium as Young Tuxx and his Muppet roommate (Lil Tuxx) struggle to pay rent, following advice in a money-making guide and failing time and time again.

Oakland, CA singer-songwriter Lauren Hulbert has been enchanting listeners for years with her warm, winsome, highly personal combination of folk, alternative country-rock, and atmospheric semi-acoustic pop. “Gone In One”, which Lauren directed along with Ryan Houchin, is her first proper video. It’s a teaser for her upcoming album Superbloom, and builds on the aesthetic success of Beneath The Soil, her 2017 folk-pop project.

On his own and with his band The Boys, Greg Hoy has always put a premium on direct connection with his listeners – both on his records and at his live show, which Dive and Conquer described as akin to “Jack White and Jack Black.” In the “Messed Up World” music video, which Hoy directed, he assembles a five-iPhone circus. Hoy is the ringmaster, and legendary New York City go-go dancer and showgirl Anna Copa Cabanna appears in the center ring. Other performers join in the peripheral screens, including R&B singer Septymber.

Kentucky might not be known for hip-hop, but Louisville rising star Joey Phantom is putting himself on the map. “Joint and a Juicebox” follows “Summertime” and “Killin Shit Again”, and this track was produced by Grammy nominee Illuid Haller, who played piano on Cordae’s chart-topping 2019 debut album The Lost Boy and mixed by Goods Producer and Jay Bump. Leo The Shooter directed the “Joint and a Juicebox” clip, which also features reality-distorting illustrations by Tahj Mullins (author and artist of the children’s book There’s A Moose On The Loose). Here, Joey is making moves, handling his business… and, uh, passing a substance to an animated wizard in a pizza hat.

SNYPA’s newest single “All Night” works as a centrifuge; it’s simultaneously North American, tropical Caribbean, Euro-technical, and pan-African, all in three delirious minutes. Directed by The Picture Man & Snypa, the “All Night” video is similarly poised: SNYPA holds court at a colorful club, rapping with the sort of casual confidence known to the best-loved rap stars.