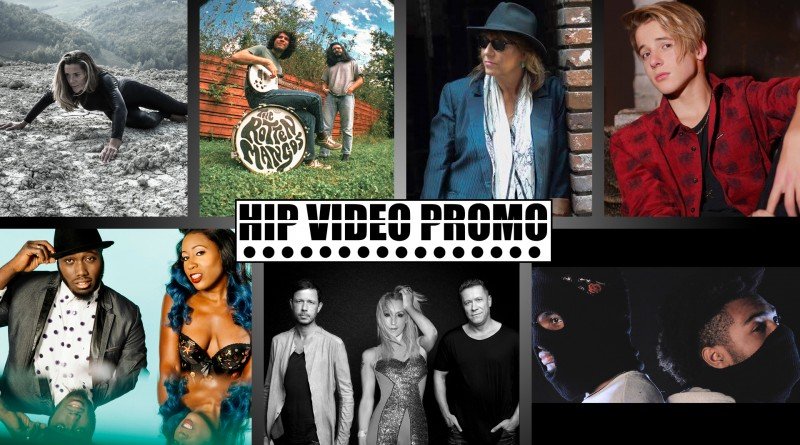 Each year, we work with countless artists and record labels to promote new music videos. And no matter how many clips we share, there’s an undeniable buzz of excitement when we get to share an artist’s newest visual effort with the world for the first time. Anyone who thinks the end of the year is slow should take a look at our current client list… this week, we’ve got seven absolutely stellar new videos to share! The newest HIP Picks – Weekly Client Roundup video gives you the low-down on some of our current projects, and we’ll tell you a little bit about each one below.

You might not think dance music is for you, but take a listen to Germany’s most successful trance DJ / producer duo Cosmic Gate and we have a feeling you’ll change your mind. For their latest single “Fall Into You”, they’ve paired up with singer/songwriter JES and it seems this is a match made in heaven, as they’ve already achieved more than three million streams on Spotify. The hypnotic track is paired with an equally mesmerizing music video, as JES somersaults through space in slow motion, while lightning flashes far in the distance.

There’s something undeniably fun about 80s funk music, and who doesn’t enjoy a feel-good love song? If you’re looking for a more modern take on the classic genre, look no further than husband-and-wife pair Dee and Erika Rhodes, who make up the Atlanta-based musical duo The APX. When speaking about their brand new clip for “Right On Time”, Dee says “We wanted to have a song that just felt right as soon as you played it.” The song blends 80s funk and new wave, and the video combines sonic and visual influence from everyone from Jody Watley to Phantogram.

From New York City to Nashville, Janey Street is a singer-songwriter with a heart of gold and a voice to match. Her latest single “Undone”, from the album In My Own Skin, seeks to answer questions we all find ourselves burdened with. The “Undone” video shows New York City in its true form, from Times Square to Ground Zero to the people who call it home.

Picture, if you will, a perfect summer afternoon, with the sun shining, the birds chirping, and not a care in the world. Coming to us from Austin, Texas is psychedelic pop-rock group The Rotten Mangos, and they’ve captured this moment with their new video for “In Love With The Afternoon.” “In Love With The Afternoon” combines footage filmed by Vanessa Pla on Super 8 film with Sgt. Pepper’s-esque psychedelic animated scenes created by Amber McCall. The Rotten Mangos are here to prove that quality organic songwriting will never go out of style.

Every corner of the Lone Star State has its own piece of the musical mosaic, and from Dallas, Texas comes Michael Fang & Chigo Ace, part of the hip-hop collaboration known as Third Force Collective. Their constant flow of energy (which they refer to as the “Darc Wav”) is evident in the single “Now”, which sees Fang deliver the hook as Ace reigns in the verses. The “Now” video features budding model and actress Kylie Boyd, as filmmaker Uzo follows Fang and Ace around their college town of Lubbock.

Some artists make acoustic music, some prefer electronic, but Florence Donovan- better known as Dos Floris– manages to combine the two for a sound that’s nothing short of revolutionary. After leaving a normal day job, she spent two years at home writing, producing, and recording what would become her debut album The Widowed Earth. The new video for “Silence” is hypnotic and soothing, and sees Dos Floris walking away from normalcy along a path paved by her own deliverance.

Just like Justin Bieber and Harry Styles, Matteo Markus Bok is a true teen icon. From his musical theater performances as young as 9 years old, there was no doubt he had what it takes to make it big. Following his first single “Just One Lie” in May 2017 as well as tours around Europe, this Italian teen is ready to reach stateside audiences with his video for “This Christmas.” It’s a delightfully seasonal clip that sees Matteo spending the night with a young lady that he sees as the most special of them all.