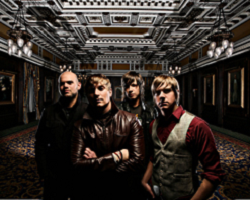 There’s something magical about music that’s both sweeping yet intimate, and from their 2006 debut Daylight, NEEDTOBREATHE have done just that. While the Seneca, South Carolina quartet have been described as Contemporary Christian Music (CCM), the themes of faith and devotion seamlessly translate to secular, mainstream listeners. Brothers William Stanley “Bear” Rinehart III and Nathaniel Bryant “Bo” Rinehart formed the band in 1998, and eight years later they’d signed to Atlantic Records and released their debut album Daylight on April 4, 2006.

Reverberating with near-spiritual energy, we’re on board with AllMusic‘s statement that Daylight is “slick yet intigrating, earnest yet endearing.” That summer we began a campaign promoting the video for the lead single “You Are Here”, which sees Bear and Bo harmonize on both vocals and guitars in a blast of pure oxygen. Video director Shane Drake had shot clips for more than fifty bands (like Fall Out Boy and Panic! At The Disco), as well as working on countless promo spots, and did a stellar job at capturing the band. NEEDTOBREATHE are presented here on a black soundstage with the brightest of spotlights, all the while Rinehart proves himself a Good Samaritan as he intercepts a thief and offers justice.

NEEDTOBREATHE have now released a total of six studio albums, and with each release they get bigger and better, with more copies sold and higher positions reached on the chart. The Heat (2007) reached Number 164 on the Billboard Top 200 and Number 2 on the Top Heatseekers chart; The Outsiders (2009) debuted at Number 20 and was certified Gold by the RIAA; The Reckoning (2011) debuted at Number 6; Rivers in the Wasteland (2014) debuted at Number 3; and Hard Love (2016) debuted at Number 2. The Reckoning, Rivers in the Wasteland, and Hard Love all hit Number 1 on the US Christian Albums chart. They continue to tour regularly, playing headlining shows as well as support slots: in April 2017 they supported Faith Hill and Tim McGraw on select shows of the Soul2Soul The World Tour 2017.

NEEDTOBREATHE has a few shows left on the 2017 leg of their All The Feels Tour. They’ll return to the road in January, though we suggest picking up your tickets now: most shows on the All The Feels Tour have sold out. You can see a full list of the band’s upcoming shows, as well as links to purchase tickets, on their website here.

We’ve been fans of NEEDTOBREATHE since day one, and we’re eager to see what else they have in store for the future! We can’t wait to see who becomes the next break-out artist. Do you think your video has what it takes to be the next break-out smash hit? Get in touch with Andy Gesner and the rest of the HIP Video Promo team by giving us a call at (732)-613-1779 or emailing us at info@HIPVideoPromo.com.