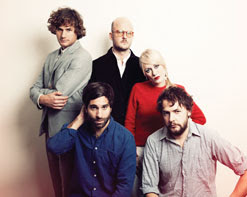 Here at HIP Video Promo, we’ve always had a place in our hearts for our favorite Stockholmers, Shout Out Louds. Their album Our Ill Wills is a regular part of our playlists, along with their 2010 album Work. Shout Out Louds have presented music fans from all over with their fresh take on contemporary indie rock. Never afraid to push their musical boundaries the band was a trendsetter when it came to incorporating elements of everything from shoegazer to 80’s synth pop into their sound. Their new album Optica, along with the new video “Walking In Your Footsteps”, may just be their most ambitious effort yet, and the end result is one that may be their best yet.

In support of Work, members Adam, Bebban, Ted, Carl, and Eric headed out on their most successful tour known to date and then returned home with their own pursuits. When the time came to hunker down on another Shout Out Louds record, they had a certain idea to return to the playful spirit that first brought them together ten years ago. Rather than rehearsing and recording in the studio as they had always done, each member of Shout Out Louds felt free to write and work on their own parts individually as the new album Optica began to take shape. The record features a string composer that helps Optica achieve lush arrangements described by Carl as “Disney on drugs” and by Adam as “like warm mayonnaise.”

Shout Out Louds took their time with the songs on Optica, spending at least one and half years in a small Stockholm studio and producing themselves for the first time without the help from Johannes Berglund. A theme emerged presenting the world with Optica, an album that celebrates color and light. HIP Video Promo brought you video clips such as “Impossible” and “Tonight I Have To Leave It.” From the new album, we present “Walking In Your Footsteps.” Click HERE for the full bio on HIPVideoPromo.com.