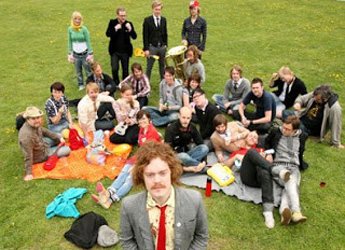 When you think of the term “rock band,” you might think first about the guitar. Then the drums. Then the bass. Then the vocals. And each of these instruments is played by, or sung by, either a duo, trio or quartet.
I’m From Barcelona, on the other hand, boasts a membership of 29 people.
Yeah. They’re a rock band too. Stop being so narrow-minded.
Using the concept of Queen and the indie Polyphonic Spree, I’m From Barcelona packs the punch of an indie band but, with their extended membership, they carve out a niche for themselves using sweeping choruses, dynamic tempo changes, and powerful crescendos.
Their sophomore effort, “Who Killed Harry Houdini?” is coming out this October. The album is named for frontman Emanuel Lundgren’s fascination with Harry Houdini and his own failed attempts at magic tricks and trying to fill Houdini’s formidable shoes. The album will also feature French folk rocker SoKo on the song “Gunhild.”

Here’s the video for the first single from “Who Killed Harry Houdini?” below: