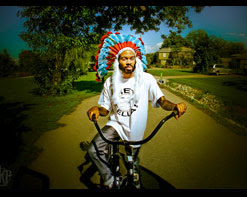 B-Rad From The Breeze is a positive hip-hop artist on the rise. With influences revolving around a multitude of musical genres, his outlook on life and the music industry has molded his craft as an artist and musician. HIP Video Promo is excited to be working with this fundamental hip-hop artist, and Hey Fella, LLC presents his newest video clip for the debut single “Hey Fella.”

B-Rad From The Breeze got started as an artist in 2006 under the name Delivery. During the course of four years, he released seven mix-tapes, a full-length album, and a three-track EP. In 2010 B-Rad took a brief hiatus from the music industry in order to find his true self through a spiritual awakening causing him to change his outlook on his craft as a musical genius. With a triumphant return to the music scene in 2011, B-Rad From The Breeze released The Awakening in January of 2011 and then the significant mix-tape The Rebroadcast in September 2011. Hosted by DJ Slikk and Coast 2 Coast, the mix-tape featured enlightening concepts that have established him as a positive hip-hop and R&B new age artist.

The Hey Fella! single was released in October 2012 and presented music fans from all over with the radiant, yet ambiguous demeanor of this budding rapper. He then followed that with Hey Fella! (Chopped & Screwed),released earlier this month and includes tracks containing lyrics from this open-minded artist that bring his quirky and eccentric style to life. His single “Hey Fella” highlights and accentuates the breezy flow and creative techniques that make up this highly anticipated album full length album, BLISS, due for a Spring 2013 release. Full bio HERE on HIPVideoPromo.com!