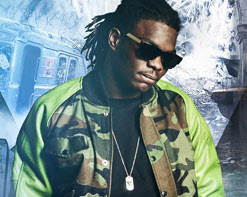 Ezekiel Harris, better known by his rap moniker E-Guttah, is a fierce and energetic rapper hailing from Miami, Florida. Full of an inexplicable Southern charm, E-Guttah takes his fans to a whole new world with his ardent vocals and happy-go-lucky demeanor. HIP Video Promo & KES Music & Video Distribution presents an all encompassing single and a debut video clip “We Can Do It Forever” featuring the powerful vocals of the artist Key Wayne.

E-Guttah’s story sounds familiar to the ears of most hip-hop artists—the youngest of nine siblings, he began washing cars and cutting yards at a young age. Growing up with his father mostly absent, he began to lose hope, but after a divorce his father was awarded custody of him. Young E watched as his life began to take a dramatic turn. The street life called his name, and the illusion of fast money being obtained by his negative actions of selling drugs took over his life. However, after a brush with death at the age of eighteen, Ezekiel made a full recovery and turned his life around.

E-Guttah began studying writing and vocabulary and soon learned the fundamentals of music. He then found his life’s true purpose, and his motivation currently lies within reaching out to his community as a positive force by teaching the younger generation through his own life experiences. His debut single “We Can Do It Forever” is a positive anthem that includes a highly unique and seductive subject matter. E-Guttah’s powerful lyrics are combined with the talented Key Wayne’s vocals to present music fans of every genre with a feel-good song that is both empowering and inspirational. Click HERE for the full bio on HIPVideoPromo.com!