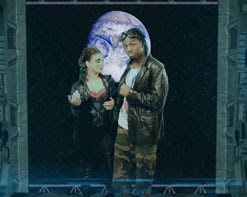 Funk Daddy has produced, engineered, and written songs for music sensations all over the country since his days of high school. Gold and platinum artists have been inspired by his incredible turntable skills, but it all began for Funk Daddy with his overwhelming hip-hop battle technique. Although he gained first place in DJ battles in and out of the United States, Funk Daddy wanted to make his mark in his life-long passion—producing. A friend, J.D. Hill, met Bay Area legend E-40 at the Gavin Convention in San Francisco where the word about DJ Funk Daddy had spread; within weeks, E-40 brought the rising star in to his studio to produce three tracks on his first RIAA Certified Platinum Album titled In a Major Way.

From there, Funk Daddy’s popularity shot through the roof, and in no time he had his own solo album Funk U Right on Up. He continued to record three additional solo albums, all of which were featured in the former ABC weekly series Dangerous Minds, the hip-hop documentary Rhyme and Reason, as well as the film 3 Strikes. His success has rocked the music scene throughout the years, and from the album Planet 206, we present you with “Grown Ass Kid,” featuring an intriguing new artist, Spac3Man.

Directors Dmitri Antos and Philip Harvey take us through the wonders of space in this encouraging video. The song “Grown Ass Kid” itself plays with the idea of dreams; dreams that DJ Funk Daddy has had all his life. Here he presents his viewers with the notion that he is all grown up, and is living out the success of his music career. The featuring artist Spac3Man adds so much style and flavor to the song that emanates a unique form of contemporary hip-hop music. At the beginning of the video, we watch as these artists come to life in space and conjure up fluid rap beats and melodies that make you soar through space until the end of the video.