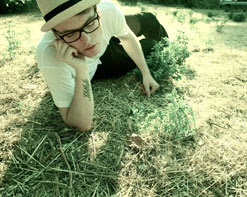 The undeniable essence of the R&B and soul music genres is not black and white. There are a number of elements and techniques that must be mastered in order to achieve this swaggering ability. Some artists have to work at it, while the best are just born with it. Like rising artist August 8, for instance. He is a man of many endeavors, focusing on his in-home recording sessions and songwriting. But there is a difference that exists within his style and performing skills that separates him from contemporary R&B captivators such as Justin Timberlake. He is an artist with a hidden agenda and an irresistible balance of soul and R&B elements that exist throughout his music.

August 8 became inspired by music and performance arts at the mere age of eight, hence the creative name. With an education in a supportive atmosphere, August learned several talents in the likes of learning the guitar, playing the drums, and ideas revolving around photography and design. August 8 takes pride in his perseverance to make a goal for himself towards his musical passions. His approach to music is that of a dreamer and a believer, and he owns up to every ounce of it throughout the music that he creates. August’s appreciation for music is evident within his openness towards all music genres. A self-taught lover of all music, this artist is capable of creating freedom through his sexy and seductive beats. This impressiveness of Eight’s dedication and passion is clear in his video for “Mystery.”

“Mystery” is a song about two lovers that are keeping one secret. The video takes on a detective fiction feel, where the plot is packed with intense and dramatic action. From the beginning, we are introduced to the seductive side of August 8’s demeanor where we even seen him crossing paths with his lover’s lover. The video seems complicated, and it somewhat is; August 8 has created a song with a theme that states that love is complicated. It is a display of what we sometimes do for love—whether it’s crazy and extreme or just downright idiotic. And the sultry, yet soothing sounds of August 8 do an incredible job of keeping you enthralled. “Mystery” explains that with true love comes bloodshed, and although August 8 exposes himself to the peculiar actions of love, he still would rather not play games and keep his secrets a secret. Click HERE for August 8’s profile on HIPVideoPromo.com