Introducing…. ON THE FIFTY

Step inside a party like you’ve never seen before with The CoOp! 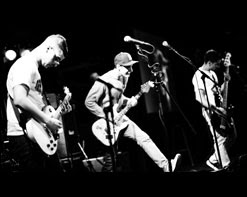 Some college kids spend their winter break hanging out. But the members of Brooklyn, NY band On The Fifty spent their January break realizing a dream: they got their musical hero to produce their record. That hero is Anthony Raneri, frontman of the Queens, NY punk band Bayside, and the 5 song E.P. Raneri produced for On The Fifty is entitled “Fast Hands, Bad Timing”. Given the age of the band members (all in their final year of college) It’s surprising how epic, how involving both the music and lyrics are on “Fast Hands, Bad Timing”. Raneri’s visceral production techniques give the songs a lingering urgency. On The Fifty’s “Fast Hands, Bad Timing” is a record for anyone who’s spend an aimless night driving around their neighborhhood, looking for something to do, and wondering what their future will be.

Those of us that still appreciate a little bit of juvenile humor will appreciate the fact that the even though the band exhibits a maturity beyond their years at times, they also have the ability to exhibit the kind of maturity we might expect from a crew of teenage boys. In their video for “The Future” we see the band exhibiting a rather reckless appreciation for illegal substances, masturbation, sleeping, video games and junk food. We should also tell you that we’re tacking on the uncensored version of the video so the world can see what is behind the blur and the black bars! It’s refreshing to see a band with a good sense of humor about themselves, even while they keep the music focused on the much more daunting task of examining what the future might actually hold for them. Clearly that is some heavy subject matter, but with On The Fifty, they are able to tackle it with ease and a positive outlook.Click HERE for full bio on HIPVideoPromo.com!