Step inside a party like you’ve never seen before with The CoOp!

Introducing…. ON THE FIFTY 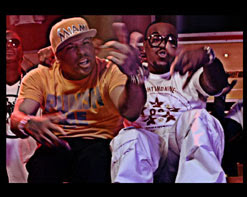 As up and coming rappers, born in various states around the nation, they were all fans of music at young ages and yet influenced by different regions. TV wanting to be a rapper at the age of four his compassion would grow into adulthood after witnessing his cousin, Fatboi, DJ at parties around Atlanta. Legacy exhibiting the passion to entertain since a teenager, together ready to take center stage, they are confident that they have undergone the artistic growth to carve their own niche in the rap game.
Currently releasing a series of mixtapes to accompany their campaign, with music inspired by real life experiences of themselves and their friends, they have already enlisted features from well-known artists. While they plan on adding more popular artists to the upcoming mixtape series, they are still open to working with newcomers. Their benevolence should not go unnoticed too…. Aside from providing great music TV wants to provide good jobs and homes for the people of Virginia, Georgia and North Carolina. Legacy wants to do the same for his birthplace of Puerto Rico, along with NYC, and Florida. “We don’t do this music for just us, It’s a Family thing,” they explain.

For their new video “About To Be Some Shhh” the group enlisted their vast network of friends down to Club Play in Miami where they throw the wildest part you’ve ever set your eyes on. Rolling up in BMW stretch limos, Ferraris and a couple of decked out T-REX 3 wheel rides, it’s clear from the beginning that The Co-Op means business! Once they’ve passed off their whips to the valet, they take their crew indoors and set up shop at the corner table and open up an endless flow of bottle service of the finest variety.Click HERE for the full bio!

*Video for “About To Be Some Shhh” coming soon!