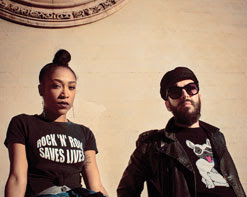 PYYRAMIDS is the product of a creative union between two minds joined together from across a great distance. This dark, yet angelic musical combination based out of Los Angeles intertwines modern and classic elements to make up this fusion of indie rock. HIP Video Promo is pleased to be working with Paracadute to bring you this unique musical collective. Without further adieu, we present to programmers and contemporary music fans with the tantalizing music video for PYYRAMIDS’ newest single “Do You Think You’re Enough.”

Comprised of Tim Nordwind from OK Go and Drea Smith of He Say/She Say, this enigmatic duo first bonded over an affinity for first-wave British post-punk music and 80s Manchester bands. After a mutual friend introduced the pair via e-mail, a fast friendship began and musical ideas emerged. Nordwind is known for his productive beat making where Smith takes on the role of lyrical genius, and the two feed off each other’s energy. Smith had written a handful of songs before meeting Nordwind in person, but over time, PYYRAMIDS developed a sound favoring stripped-back instruments mixed with electronic beats.
Click here for the full bio on HIPVideoPromo.com.