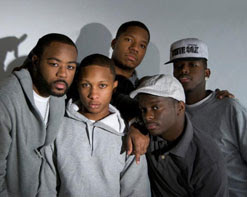 Contemporary hip-hop music seems to veer in different directions—while there are a plethora of young artists who think it legitimizes them to rap about sex, violence, and drugs, there are a significant few who sing about the main priorities of hip-hop and R&B, which is centered on feeling good. UpTown CeLebrities, better known as the The UC, is a Chicago based hip-hop group that discusses the pleasure that surrounds creating music that is both inspirational and unbiased. With sounds that cross between Q-Tip and Mos Def, UpTown CeLebrities transform contemporary beats into a stylistic and traditional form of hip-hip music.

The UC lineup consists of D-Flaire, Jon De Pledge, Tay Devito, E-Man, and Vic, all who take on the stylistic approaches that make Uptown Celebrities stand out. With the release of their debut mixtape The Variety Show hosted by comedian Shannon D, The UC presents listeners with a form of hip-hop music that is true to the traditions of the genre. With the advent of modern technology, the art of making mixtapes has opened the doors to a slew of amateurs who only serve to dilute the scene. However, we present you with UpTown CeLebrities, who show off their true skill in creating the best combination of talented and emerging artists.

The title of the track is of itself not a mystery. “Feel Good Music” captures the idea that the purpose of any genre of music should be to make you feel good. The group members are featured throughout the scenes, standing on the streets and spilling their hearts out about their love for music. The simplicity of the video suggests that the artists involved in The UC are not asking for your approval; they’re not performing while thirty naked women take their clothes off around them; they’re not driving fancy cars. They are merely making the statement that hip-hop music isn’t about the type of clothes you wear or the car you drive. UpTown CeLebrities are about content and lyrics, and this is clear within “Feel Good Music.”