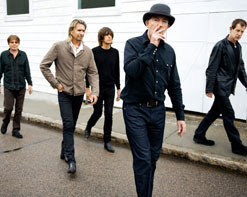 New HIP Client, The Fixx are getting some much deserved online exposure; check out an except from HuffingtonPost.com:

The Fixx has figured out a way to channel the news ticker into one of its most memorable melodies. “Anyone Else” reflects the frustration — and defiant optimism — of the 99 percent with a killer chorus about embracing individuality. The Occupy Movement, The Hunger Games, and the fight over Prop 8 all make cameos in the video (world premiered above) directed by Jon Tod Collins.
“The ‘Occupy’ movement came along, and — for me — it was a welling up of people realizing what humanity could aspire to,” Curnin says.
Beautiful Friction’s social overtones reflect Curnin’s realization “that, for the first time in a long time, there’s a real sense of change going on in the world.”

Click here to check out the feature in all it’s glory.
And peep the video for “Anyone Else” below: