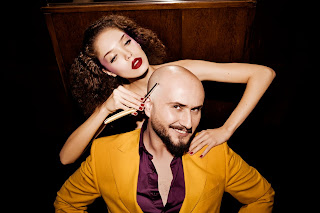 Beduk is one of the rare artists that manage to create a vibe that changed the whole conception of a nation’s way of looking at popular music. His two albums; “Even Better” and “Dance Revolution” shocked the Turkish music market where the popular music is conceived as raki, sis kebap, belly dance and dumbek. He broke the rules of the game, by his one of a kind video of his latest single “Automatik” where he appeared as a wedding singer which simulates a ’92 made VHS taped, local authentic Turkish wedding. Aired exclusively on MTV and stayed at the top of the charts for several weeks and gathered massive impression over youtube. He can be described as one of a kind genius that produces, releases his albums, records, mixes, performs the lead vocals, backing vocals, all the instruments and even does his graphic design totally by him self. His music and vision stands at a point where Bee Gees meet with Robert Palmer and Right Said Fred as they decide to go to a contemporary dance-pop concert to beat their brains out. He has completely changed the conception of popular music for many people and vitalized the Turkish market, thus, called as the hero of the local music scene by authorities and music fans. And now Beduk is ready to conquer the global charts with his disco soul and contemporary vision.

Here is his video for “Electric Girl”