Jessie and the Toy Boys!

Have you heard LOVE, ROBOT yet?? 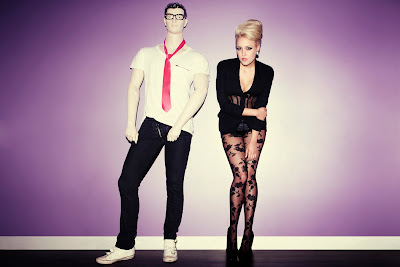 A talented singer, songwriter, producer and dancer, Jessie Malikouti’s artistic destiny has been steadily unfolding since her early teens. After first appearing in a string of commercials and music videos, this Southern California native hit the Sunset Strip with her all-girl group Shut Up Stella and eventually inked a deal with Epic Records. Their music – a slick hybrid of pop, rock and hip-hop – was featured in many TV shows and several movies before Malakouti decided to pursue a solo career in 2008. Since that time, her development has been exponential. Leaving her comfort zone over 5000 miles behind her, she relocated to London and immersed herself in the underground club scene. She released a couple of singles and videos, and before long the locals recognized her ample talents. She soon found herself writing songs with Xenomania – the UK’s top pop production team – and even landed one of her tracks (“Standing Up for the Lonely”) on a compilation put out by Ministry of Sound – an important and influential dance music label. But with Jessie and the Toy Boys, Malakouti is introducing a unique, new vision and stepping it all up to the next level. According to the mastermind herself, Jessie and the Toy Boys are “a band.” But they may be mannequins. On her Facebook page, her bandmates are named numerically. (#12, #17, #25, and #4 1/2, to be specific.) And while all of that is oddly intriguing, it is the music itself and Jessie’s star-making performance that is truly exciting.

In the video for “Push It” (directed by Don Tyler), a seemingly routine trip to the laundromat serves as the unassuming setup before several of Jessie’s midday fantasies manifest themselves in brilliant color on top of a track that just won’t quit for three-and-a-half minutes of dance floor dynamite. She aggressively seduces a young man on the laundry machine. Then she and a group of dancers deliver some top-notch choreography in the aisle. Yelawolf spits a hot verse. And even a couple of the Toy Boys themselves make an appearance before the video reaches its wet and wild climax: a full-on club scene breaking out inside the laundromat, amidst a glorious mess of soapy bubbles, complete with some cool, unexpected visual effects as well. It will amp you up, make you move, and will definitely make your next trip to the laundromat seem more than a little disappointing.

Check out Jessie’s new video for “Push It”