Maximo Park to release “Quicken the Heart” next month

Tiny Masters of Today rock the world of music 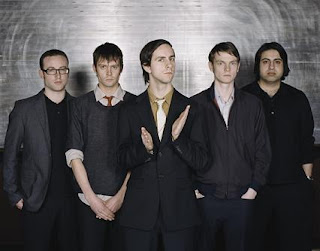 Maximo Park are champions of quirky melodrama–much like Morrissey and and Belle and Sebastian, they meld black humor in among pretty guitars. But in addition to irony, they get serious. At times, they leave their hearts bare and exposed–and they are angry and poetic and charming, all at the same time.

Rolling Stone said this about their last album, Our Earthly Pleasures:

“Smith sings every line like his girlfriend is downstairs loading her boxes of books into her new boyfriend’s car.”

If you’re a fan, be sure to pick up their new album in May, called Quicken The Heart. It was recorded Nick Launay, who also produced the Yeah Yeah Yeahs’ new album Its Blitz!

And don’t forget to watch the video for “The Kids are Sick Again,” the single from Quicken the Heart.