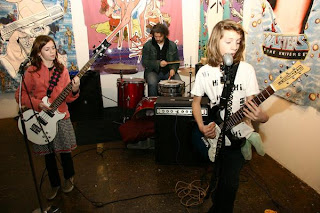 When David Bowie calls you “genius,” you know your career has gone somewhere. That’s a good sign.

And that’s not the only lavish praise Tiny Masters of Today has received. Newsweek called the duo “remarkable.” Planet of Sound UK called their music “a disturbingly convincing cartoon punk racket.”

The kicker? Ada is only 13 years old. Ivan, 15. And they started playing music together in 2005, when Ada was 9 and Ivan was 11. Yup. At such a young age, they’ve already accomplished so much!

Their music is not the typical manufactured pop one might expect from people this small. On the contrary, they’ve come up with everything themselves–and you don’t hear strains of Miley Cyrus or the Jonas Brothers. Instead, you hear strains of the Stooges. And, gasp, Sonic Youth and The Pixies. NME put it this way: “If Thurston Moore and PJ Harvey were siblings pissed off that they were born after Surfer Rosa came out, they’d make an album like this.”

I embedded the video for “Skeletons” below. It’s full of cool guitar distortion, grainy vocals, and dress-up clothes.