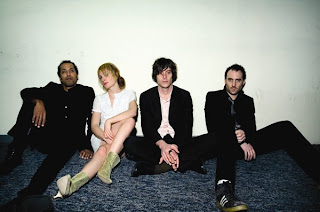 Metric is setting foot on some of the world’s greatest stages in Canada, Europe and the U.S. this spring. Right now, they’re in Ontario. Then you’ll blink, and they’ll be in Paris. Then Amsterdam. And so on.

And if you’re attending one of Metric’s shows this spring, look forward to an energetic and fun live set.

On Pitchfork, a blogger praises Metric’s shows, saying that on stage, Metric don’t just stand there–they perform. They don’t gaze at their shoes.

Although many indie bands believe in doing nothing and being completely low-key, Metric believes there should be some engagement, and some movement, some theatricality.

Emily Haines put it this way: “I find the people and shows I really admire don’t strictly adhere to the idea of the invisible self.” Metric believes putting oneself out there, with some showsmanship and style, is the way to go.