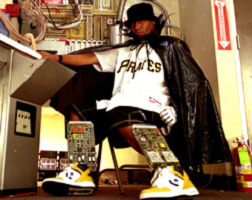 After 20 solid years of promoting music videos, many of our videos have skyrocketed to the top. Today, we present you with one of our most-watched videos on our Youtube channel. When an artist changes his persona, he wants to experiment with a project that isn’t fitting enough to continue with under his regular name. This is the case for Dr. Octagon, the persona of American rapper Keith Matthew Thornton, better known as Kool Keith. Released in 1996, Dr. Octagonecologyst, which established Kool Keith as Dr. Octagon, tells the story of an extraterrestrial time and space traveling gynecologist and surgeon from Jupiter. He delivered genuine philosophical reflections and humorously potty-mouthed jokes with such seamlessness. The album did so well that Dr. Octagon released two more albums under the alter ego.

He’s the patron saint of alternative hip-hop and a writer who has never shied away from difficult or controversial subject matter best known for his sci-fi themes. Dr. Octagonecologyst made Dr. Octagon the leading lights of the mid-Nineties alt-rap revolution and helped launch the career of Dan “The Automator” Nakamura, a young producer who was learning on the job.

The music video for “Trees”is a PSA to its literal title. We promoted this video in 2006, and it has amassed over 358k views on our YouTube channel because of its strong visual metaphor for the earth’s fragility. Our young protagonist acts as a weather guide, and as he moves his pointer around the map, the sun begins to burn in place. Anthropomorphic trees run through the forest and fall in rhythm into open graves as the camera sweeps through the decayed forest. Factories, cities, and highways replace the past lush landscape, and the child guides the trees away into an unknown area.

As of right now, The Dr. Octagon era seems to be over, and all music is now being released under Kool Keith. In October 2016, Kool Keith released his latest clip for “Super Hero,” a hypnotic piece that toys with figurines, lights, colors, and shapes to create an otherworldly piece. He played a special show Valentine’s weekend with Ice T and has a few upcoming shows in Colorado and California.