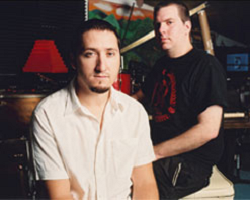 After 20 solid years of promoting music videos, many of our videos have skyrocketed to the top. Today, we present you with one of our most-watched videos on our Youtube channel. We worked together with Pinback to promote three videos over their career, and the video for “Fortress” has now built up an impressive 1.6 million views… AMAZING!

Formed in 1998 by Rob Crow and Armistead Burwell Smith IV, Pinback have won increasing admiration and respect with each recording. Summer in Abaddon was their third full-length overall and their first for Touch & Go, and it was an encapsulation of everything that makes this post-punk band unforgettable. “Fortress” is one of the poppiest and most straightforward songs Pinback has ever made – but trust that it bears the hallmarks of their sound. The “Fortress” clip, however – the first video we promoted from the band – at times has a dark and stormy aesthetic.

Starring in the clip are hand-drawn stick-figure soldiers, drawn by Loyalkaspar, who’s shown the scene play out in impressive detail, from a choreographed dance sequence to war-torn destruction. A prince and princess fall in love, but what will become of it?

Pinback have had guest appearances on several TV shows, including Sydney White (2007), How I Met Your Mother (2009), Yo Gabba Gabba!, and The OC (2010). They released the album Information Received in 2012 and we promoted the video for “Sherman” that fall. Check it out below!