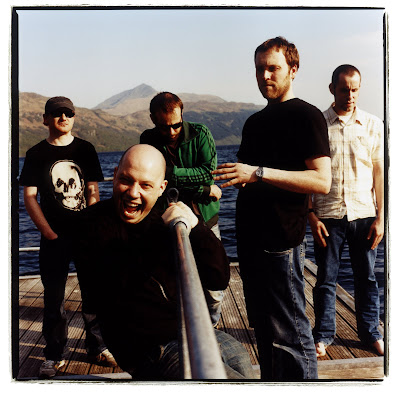 Mogwai’s seventh studio full-length, superbly titled Hardcore Will Never Die, But You Will has been rapidly embraced by both fans of the band as well as the critical sphere. Pitchfork has thoroughly enjoyed the album, claiming that it features the band’s “best guitar lick in years.” The lads at Rolling Stone are even more enthusiastic about the album, pressing that the group is a shining example of how other bands should mature, calling Mogwai “still inventive, still challenging themselves and still insanely loud.” SPIN, not to be outdone, has also fully endorsed the offering, calling it “epic, frequently breathtaking.” These are only a few of the many music publications that are in love with the Scots’ latest work. In fact, AbsolutePunk has given the album a near perfect score of 93%! The band is already capitalizing on all the raving reviews by conducting a massive, world encompassing, headlining tour, with the U.S. leg touching down during this spring. The band’s schedule also includes this year’s major music festivals like iTunes Festival and Bestival.

The “Mexican Grand Prix” music video is a tribute to all the citizens of the band’s home base, Glasgow. The rapidly cut clip features many different people as they are encountered about their lives in the span of a full day. This creates a very interesting perspective on the diversity of our world in just one urban encapsulation. The fast cuts are perfectly synced to the beat of the drums, including all of the snare rolls! This is one of those videos where the viewer need not worry about plotlines or characters and can just sit back, enjoying the diversity of Glasgow’s inhabitants and allowing him or herself to fully entranced by the audiovisual before them. full bio HERE.

Check out the new video for “Mexican Grand Prix” below: