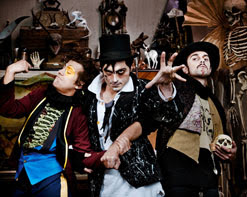 The R’s (formerly The Record’s) formed in the summer of 2002 in Brescia, Italy. They are Pierluigi Ballarin (vocals, guitar), Gaetano Polignano (drums), and Pietro Paletti (bass, vocals). Early on the band released a series of self-produced recordings that helped build a cult following. In 2007 they won a music contest sponsored by Italy’s most widely read newspaper and released their first official EP, Joyful Celebration. The record contained the single “Move Your Little Fingers,” picked up by the most prominent national radio stations.

In 2008 The R’s released the album Money’s On Fire with the collaboration of the venerated musician producer Giovanni Ferrario (P.J. Harvey). With one of the tracks from the album featured on a major national advertising campaign and prominent exposure on MTV Italy the band began reaching a wide audience. By the end of the year they were on best-of lists of the most important newspapers and music publications in Italy.

The R’s music crosses genres and eras with hints of the early days of rock – from the 1950’s to garage rock – alongside indie pop and psychedelic folk.

In 2011 The R’s signed with Nat Geo Music , the record label of the National Geographic Society that specializes in contemporary intern The R’s are preparing to make their U.S. debut in the late spring / ewith the release of their latest album De Flora Et Fauna.