Not just any Beach Boys fan 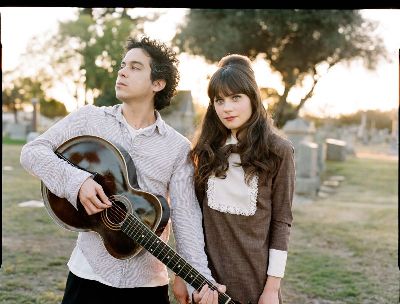 Zooey Deshanel, actress and part of the offbeat pop duo She and Him, has always been a Beach Boys fan, but she’s more than just a fan now—she has made music in her own right, and has fame of her own to claim. So when Beach Boys frontman Brian Wilson met her in the Hollywood Bowl to converse on music, as part of the Myspace Artist on Artist series, she expressed admiration for him and Wilson also expressed admiration for her. He told her she sounded like an angel and Deshanel’s eyes got all wide and she squeaked, “thank you!”
Deshanel told Wilson she’d been to one of his concerts a few years back and when they played “Surfer Girl” Deshanel said tears streamed down her face.
Wilson, shocked, said, “really? Aw.”
Check out the interview here.

While we’re on the subject of She and Him, here’s a recent video from the folkie, laid-back duo below, for the song “Why Do You Let Me Stay Here?”