Out of the Atmosphere: Brooklyn’s Own Inky Jack presents two videos…from outer space!

Watch: Patent Pending “Spin Me Around” 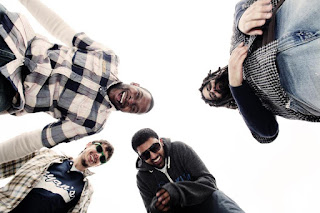 Many of Inky Jack’s  influences range from electro-pop, reggae, and punk genres. Their debut self-titled album Inky Jack, released during spring this year, is stretching their fame across the tri-state area. Their newest videos “Radar” and “The Red for Days” transcend contemporary genres and form an eclectic transfusion of indie-rock and hip-hop that has been mixed together to create an astonishing blend of contemporary music.
The founding members established their creative charms while working in the urban/pop scene with artists such as Cash Money and Diplomats before coming to their senses and delving into their indie roots with characterized pop sensibilities. They have coined the term “synthy soul rock” to describe their records as well as live performances that consist of synthesizers and drum machines as well as the classic components of a modern rock band.
Their upcoming music videos offer soul-searching through space and modern dilemmas as they withstand the hardships of daily city life. The clip “Radar” presents us with these so-called modern dilemmas, and we watch as Inky Jack floats through space, encouraging the most creative images known to the indie-rock genre.
The second clip “The Red for Days” shows all members of the band staring at a television screen that is snowy without reception. Directed and edited by Ron Brodie, the video is somewhat of a continuation of “Radar.” We watch as each member awakes from a dream to find themselves playing their own instrument. It is an anthem for what music can do for the soul, and the spunky guitar riffs express the space exploration motif that Inky Jack does so well to present viewers with.
For the complete bio, visit https://hipvideopromo.com/clients/inky_jack.php.