of Montreal DVD in the works 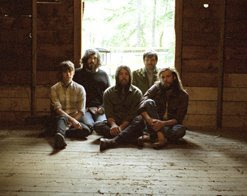 Pitchfork readers showed their admiration for four HIP bands, voting them into the top 20 lists of album favorites.

Fleet Foxes scored a no. 2 on Pitchfork’s Reader’s Poll 2008. And although TV on the Radio won the no. 1 spot, the staff admitted it was a tight race between them and Fleet Foxes for the top.

Fleet Foxes has been on a lot of 2008 lists so far–not only this one, but also on the Best Albums lists of Spin and NME. Everyone is loving their music–that curious mix of grassy fields in Alabama and dusty castles in Europe. A strange brew of classic influences, both from the 60s heydays and ancient monk sing-alongs.

In addition to Fleet Foxes, No Age made it to no. 10, and of Montreal scored a no. 19. Congrat to everyone!