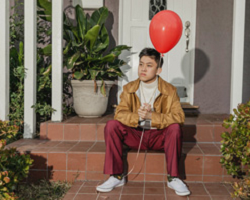 Rich Brian has made major power moves ever since the release of his viral and satirical hit, “Dat $tick” in February of 2016. Growing up homeschooled in Indonesia, Brian taught himself English through the internet and began familiarizing himself with Youtube’s platform at 11 years old. He made the final decision to move to America alone at 17, and it’s only gone up from there. From collaborating with 21 Savage and Playboi Carti to playing music festivals across the world, and to now being one of the main faces of the record label, 88rising, Rich Brian is on a nonstop hustle to make his way to the top to represent his people at home.

We worked with Rich Brian right as he was popping off in 2017, with “Glow Like Dat.” The video was viewed more than four million times in 72 hours and is dedicated to a former girlfriend. Rich Brian looks threatening in a field of multicolored flowers, thinking about what he’s lost and what’s ahead of him. Although he immersed himself in the mainstream American dream, moving stateside made him appreciate Indonesia more. In fact, his newest album, The Sailor, is all being an explorer, particularly the stories of immigrants that jump worlds in hopes of a better life. The Sailor is not only the story of Brian’s journey to America but also an ode to those that came before him.

88Rising, which began as a “Vice for Asian culture,” was a running idea in Sean Miyashiro’s mind that documented hip-hop in Asian culture. In Chinese, eighty-eight means “double happiness,” and the numbers in their logo are followed by the Chinese character for “rising.” The record label aims to promote Asians representation in music. From Rich Brian to Joji to Higher Brothers, 88rising wants to change the way people perceive Asians in media. They even held their own music festival in LA, Head in the Clouds, headlined by Rich Brian, of course. Despite his perpetual fame, Rich Brian is still stilly and youthful, making memes of himself and maintaining a funny internet presence. See it for yourself: follow him on Twitter and Instagram and like his Facebook page.