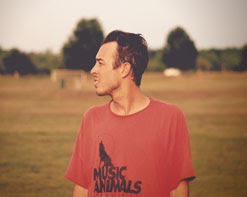 In December of 2012 we brought you the “Ghost Boy” video from Sanders Bohlke, which was one of the most visually dynamic and intriguing videos we’ve seen in all the years on the playing field. The video was the passion of directors Kamil Dymek and Pawel Ptak, and captivated viewers on the East Coast, the West Coast and everything in between. Bohlke had taken a completely hands off approach in that video, trusting his directors’ instinct. This time around, we’re bringing you a whole new interpretation of the video, this time with live action footage!

In case you missed the train the last time around, we’ll give you a refresher. Sanders Bohlke comes from the heart of the Mississippi Delta where he honed his craft and found his voice. This upbringing helped him hone a sound that was rooted in true passion and downright honesty. After attending the University of Mississippi in Oxford, he eventually made his way north to Charlotesville, VA, another bastion of musical creativity.
His newest album, Ghost Boy, has been universally praised as a work of art that commits to layers of soundscapes containing flourishing elements of folk, indie-rock, and soulful vocals. It has drawn comparisons to artists like Andrew Bird and Margot and the Nuclear So and So’s, and caught the attention of everyone from the editors of YouTube to fans of live music everywhere. Currently on tour with Rachel Yamagata, Sanders is continuing to promote Ghost Boy, and we’re certain that the new version of this video will harden existing fans around Sanders, and convert any last hold outs into his camp!

The new “Ghost Boy” video plays out like a haunted version of Cowboys and Indians. It begins peacefully enough with a Native American mother and child going about their business in the wilderness when they are happened upon by a pair of cowboys riding in from the horizon. After a brief staredown the young boy shows his courage and leaps out to protect his mother, only to be shot dead by the callous cowboy. His mother meets a similar fate. Around the campfire the two men appear at odds about the days’ events. For those wondering if they’ll get a glimpse of Sanders, keep your eyes peeled, he’s the cowboy with the conscience! Later, after they retire, the shooter is visited in the night by a true “ghost boy” who is focused on vengeance for him and his family…..