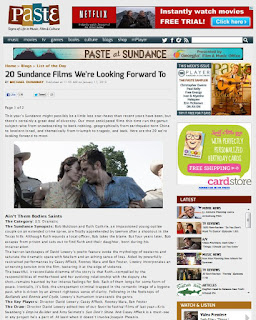 Ain’t Them Bodies Saints
The Sundance Synopsis: Bob Muldoon and Ruth Guthrie, an impassioned young outlaw couple on an extended crime spree, are finally apprehended by lawmen after a shootout in the Texas hills. Although Ruth wounds a local officer, Bob takes the blame. But four years later, Bob escapes from prison and sets out to find Ruth and their daughter, born during his incarceration.
The barren landscapes of David Lowery’s poetic feature evoke the mythology of westerns and saturate the dramatic space with fatalism and an aching sense of loss. Aided by powerfully restrained performances by Casey Affleck, Rooney Mara and Ben Foster, Lowery incorporates an unnerving tension into the film, teetering it at the edge of violence.
The beautiful, irreconcilable dilemma of the story is that Ruth—compelled by the responsibilities of motherhood and her evolving relationship with the deputy she shot—remains haunted by her intense feelings for Bob. Each of them longs for some form of peace. Ironically, it’s Bob, the unrepentant criminal trapped in the romantic image of a bygone past, who is driven by an almost righteous sense of clarity. Following in the footsteps of Badlands and Bonnie and Clyde, Lowery’s humanism transcends the genre.
The Key Players: Director David Lowery; Casey Affleck, Rooney Mara, Ben Foster
The Draw: Director David Lowery edited two of our favorite festival films of last year—Kris Swanberg’s Empire Builder and Amy Seimetz’s Sun Don’t Shine. And Casey Affleck is a must-see in any project he’s a part of. At least when it doesn’t involve Joaquin Phoenix.
Click here for the full article on PasteMagazine.com