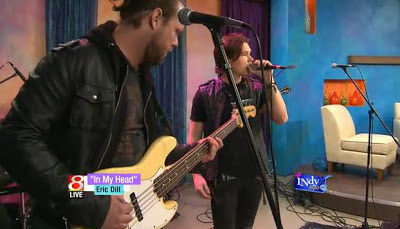 Eric Dill recently performed his upcoming single, “In My Head” in the studios of WISH TV in Indianapolis and as you should expect, it was quite a performance.

From WISH TV: Eric Dill returned to Indianapolis in late 2012, the platinum-certified, award-winning artist and singer-songwriter relocated to his native Indianapolis from Hollywood and released his Forever Is Not Enough album on his own Vigil Records. Both milestones signal the next chapters in Dill’s life.
His album, in particular, is an artistic tour-de-force, a cohesive collection of tunes that are sonically and thematically divergent but combine for a rousing aural adventure.
National recording artist Eric Dill
**  “In My Head” was released to radio on January 14th – Stay tuned for the brand new music video  COMING SOON! **