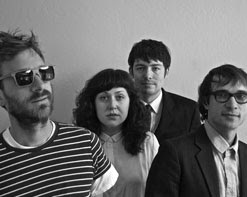 Clearly love and heartache are dominatnt themes and it’s a real life broken heart that was the main influence for Sonny & The Sunsets on their newest album Longtime Companion. They’ve been a welcome breath of fresh air for fans of the Velvet Underground, 50’s rock, early Brit Rock, and all kinds of vintage sounds. Their previous efforts for both Hit After Hit and Tomorrow Is Alright were both terrific indie rock albums that have hinted at a country influence in the past while earning 7.7 and 8.0 ratings, respectively, on Pitchfork. But it’s with Longtime Companion that Smith dives in headfirst into channeling his country music influences.

With elements that echo the country music genre, lead singer Sonny Smith has created a melodic-based structure of songs that capture fleeting moments and images of the past. Sonny Smith grew up exposed to the classy old time records of his parents and his father played banjo around the house, but Sonny admits, “it was around the house, but I didn’t like it.” He was exposed to the likes of the music, but he would resort to the thrash-like rock ballads of AC/DC, or watch the television. However, some sort of country element sunk in to Smith’s inspiration, and in no time he developed sounds that emanated Gene Clark, Johnny Cash, and The Kinks. Sonny formed Sonny & The Sunsets with band members of his country band known as The Fuckaroos. In no time, they recorded an album filled with embellished chords reminiscent of country music in a musty basement. The Sunsets have proved to be a great backing band to the ever-creative Sonny Smith who wrote the songs for their album fast and naturally.

Directed and shot by Sonny Smith himself, “Pretend You Love Me” is an ode to the lost memories of an old love. With a feel-good bass line that pulls you in, the song adheres to the fact that we are all lonesome; through this lonesomeness, sometimes we can’t recognize ourselves, but the song offers a relief for those of us who feel lost. From images that conjure memories of the past, the video moves from scenes around the Californian lifestyle that Sonny Smith creates for us. The song transforms listeners to a beach-like atmosphere, where all is calm and escapable. The tangy sounds suggest music from another time, and it proves how timeless and universal the music of Sonny & The Sunsets truly is.