The Woodies get everyone excited!

The Dirty Heads are going everywhere 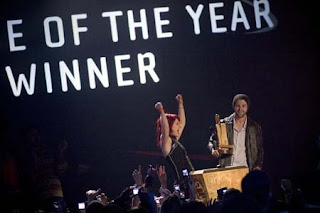 Stereogum is featuring some stellar moments from the MTVU Woodie Awards. They captured the major faces attending that evening in a large 35-photo spread, and the pictures can be found here.

The Woodie Awards, if you’re unfamiliar with the term, are given out to artists featured on the MTVu college network. The awards are referred to as woodies because the awards are, well, wood.

Apparently, wooden prizes suits the college network’s honorary ceremony more than any gold-gilded trophy (or moon men, for that matter). After all, the network’s audience is broke.

According to Rolling Stone’s online mag, here’s the winners: